A trio of thrill-seeking company directors from Doncaster took their charity fundraising target to new heights with a nerve-jangling charity skydive.

Father and son duo Paul and Lewis Smith were joined by Adrian Blatherwick to complete the team from MultiWebMarekting, all plunging 15,000 feet from a plane in Scunthorpe on 21 May.

For their efforts, they’ve raised more than £2,160 for the Bluebell Wood charity, despite originally setting a goal off £1,200 – and the money is still coming in.

The valuable funds — which were donated by clients, as well as friends and relatives — will help provide support to children who are in alternative care to hospitals during the final moments of their lives.

Managing director Paul, who founded the award-winning marketing agency, is glad his network of contacts got behind the skydive. He said: “We have a proud history of supporting charities and we’re always looking for ways we can give something back.

“I have three children of my own and it’s beyond comprehension what some of the children and families go though, so I couldn’t think of a more worthy cause.”

While there could be no disagreement on the value and usefulness of the donations for a charity, which costs £14,000 to operate every single day, there was some disagreement from the MultiWebMarketing team on quite how enjoyable the experience was.

“It was absolutely amazing,” explained Operations Director Adrian. “I really thought I was going to be scared but after all the safety checks were done and we’d made it up in the plane, I felt completely in safe hands.

“Some representatives from the charity were there to cheer us on and it was a good adrenaline rush.”

Commercial Director Lewis wasn’t quite so sold on the day out. He said: “It was like falling to your death and then being saved at the very last second; it’s not something I’d be putting my hand up to do again I must say but it was for a very worthy cause.”

The Bluebell Wood charity first opened its hospice in September 2008 and has been offering support to hundreds of families in South Yorkshire, as well as parts of Derbyshire and Lincolnshire, ever since.

If you’d like to support the dive and throw in some spare pennies, visit the trio’s Just Giving page here: https://www.justgiving.com/fundraising/multi-web-marketing4

Your donations really could go a long way. £15 could pay for a play session, £48 could pay for an hour of emergency care at just the right time and £115 could be used for a session of bereavement counselling during the toughest of moments. 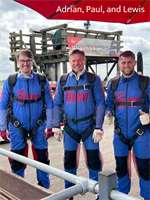