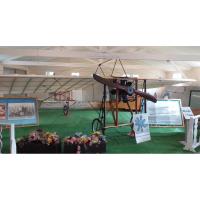 The trustees and volunteers of the South Yorkshire Aircraft Museum (SYAM) are delighted that Doncaster has been awarded City Status, as part of the Queen’s Platinum Jubilee, given that our area has always been a pioneer for the UK’s aviation sector. Although the city is well known for its heritage in railways and horse racing, the role we have played in aviation often goes overlooked. Yet it’s just as important. In 1909, Doncaster was the venue for the first UK Aviation Meeting (which we would call it an