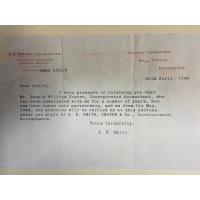 On 30th April 2021 Smith Craven Chartered Accountants celebrates 75 years of Partnership. In 1946 Mr Ronald William Craven joined Mr A. E. Smith in Partnership after working together for a number of years. On the same anniversary 75 years later we are pleased to announce as of 30th April 2021, Claire Docherty will become a Salaried Partner after joining the firm in 2014. Mark Dickinson and Robert Hood have been promoted to Associate Status. Mark’s new role will focus on new client development and