With South Yorkshire about to elect its new metro mayor, the candidates running for this position gathered together at a hustings event in Doncaster. Here, they each discussed their priorities for the role and answered questions that were posed to them by residents.

Upon being elected, the South Yorkshire Metro Mayor will use their powers to decide how we create jobs, grow the economy, run our public transport network, and build new infrastructure within the region. To find out more about this, Doncaster voters were able to attend a hustings event on Friday, so that they can make an informed decision before taking to the polls.

The event took place at Doncaster UTC and was arranged by the three South Yorkshire chambers of commerce — those being the ones for Doncaster, Barnsley & Rotherham, and Sheffield — as well as the Confederation of British Industry (CBI) and the Federation of Small Businesses (FSB).

After making their initial statements — where they explained their visions for South Yorkshire and what they will be doing if elected — the prospective mayors then took part in a lively Q&A session. During this, voters had a chance to question candidates on a diverse range of topics like: how they will support businesses in achieving their clean energy strategies; if they will be prioritizing digital infrastructure; their views on levelling up; and how they will make sure that they represent the whole electorate and not just those who live in cities.

Speaking about this, Andy Morley, President of Doncaster Chamber, said: “Whoever ends up being elected will play a major role in shaping South Yorkshire’s future, and will have a huge influence on the region’s infrastructure and economy. This hustings event was a really valuable opportunity to get to know the candidates and ask the questions that really matter. Having these kinds of conversations is really important for our leaders, businesses and residents alike.”

In addition to all of this, a new Skills Manifesto was also unveiled at the event by the three South Yorkshire chambers. Developed by the Skills Accelerator Board (which itself is comprised of businesses, skills providers, local government and the South Yorkshire Mayoral Combined Authority), this document outlines the difficulties that our region is currently facing in relation to skills and how they can best be addressed.

Drawing upon feedback from over 8,000 South Yorkshire businesses (as well as public sector colleagues and education providers) this far-reaching plan was informed by survey results, workshop discussions and case studies. As such, it accurately reflects the opinions and needs of local employers.
The Manifesto includes 40 recommendations for creating a more agile and responsive skills system in South Yorkshire which drives opportunity, productivity, and wages. It also calls on the county’s businesses to step up and get involved.

Commenting on the importance of the Skills Manifesto, Andy Morley said: “South Yorkshire is facing significant challenges when it comes to workforce skills, which is impacting everything from recruitment to the health of our economy.

“In response, employers have told us they want to get involved in developing curriculums, programmes, and qualifications that will equip people with the skills they desperately need. The fact that this does not already happen is severely holding our region back from being as strong as it otherwise could be.
“The new manifesto offers practical solutions for how we can rectify this, by closing the gap between employers and education providers. It is the first step in a long journey to making South Yorkshire an even better place to work, learn, develop and grow.”

You can watch a full recording of the Hustings event here. 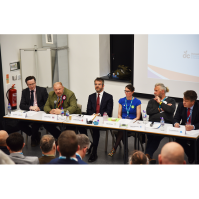