A local artist has banded together with fellow creative professionals to donate over 60 paintings to Doncaster and Bassetlaw Teaching Hospitals (DBTH).

Chinwe Russell was inspired to collate the pieces back in April 2020, after seeing just how hard her younger sister – who is employed by a local NHS trust - was working throughout lockdown.

The Nigerian born painter was profoundly touched by all the sacrifices those on the hospital frontline were making, like committing to long hours and giving up aspects of their personal lives, and so thought about how she could best express her gratitude.

Deciding to put her creative skills to use, she got to work in her studio and produced a three-piece series entitled ‘’#NHSRocks’’, which is dedicated to healthcare heroes across the globe.

Finding the experience to be really therapeutic, Chinwe then reached out to her peers in the arts community to see if they would be interested in contributing to the project as well.

Having organised exhibitions and collaborative events in the past, the Town Moor resident had a number of industry connections to draw upon and so found plenty of eager volunteers to support the campaign.

Over the course of the next several months, she managed to amass an impressive 65 paintings, which were donated from various locations around the globe, including spots as far afield as Portugal.

Once the collection was finished, Chinwe then liaised with Doncaster Royal Infirmary’s (DRI) estates team to have it displayed in the hospital, where the paintings now adorn one of the most regularly-traversed corridors.

Adding a splash of colour to the environment and cheering up those who pass them on a daily basis, the paintings have been met with a great reception.

Speaking about the donation, Suzy Brain England OBE, said: ‘’On behalf of the Trust, I would like to thank Chinwe for all the beautiful artwork. We have already received enthusiastic feedback from colleagues, who have noted how the decorations brighten up the area and cheer them up whenever they pass through. The newly refurbished corridor is one of the busiest in our Doncaster site, regularly traversed by staff and visitors, so it’s great to see it transformed into something more engaging. It was a really kind gesture and has made a big difference to the hospital environment.’’

Chinwe herself said: ‘’Art is an important way to connect with people and this is what I wanted to do; connect with those heroes in the NHS who have supported us during these challenging times. I am glad that many of the participating artists - such as Richard Appleby, Kim Farr, Janet Wallace and so many others - saw my vision and joined in. I am incredibly pleased that what started as an internal journey has managed to touch many people."

The response to Chinwe’s call for artwork was so passionate, that there was not enough room for all the donations to be hung in the same corridor. As such, conversations are now underway for her to organise a similar donation for the Trust’s Bassetlaw site. 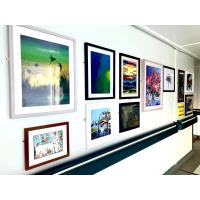